Cutting a Hole for the extra Batteries

The seat is attached by two flanged, hex-head bolts front and rear, and one phillips head screw. First remove these and put them somewhere safe.

The seat is held onto the enclosure by one bolt that comprises its hinge. It is best to remove this while you are cutting the hole, as it makes the work much easier.

Put your batteries together on a piece of paper and use them to trace an outline. Then cut out the square you marked out. This can be used as a template to mark the area of the seat enclosure that needs to be cut out. 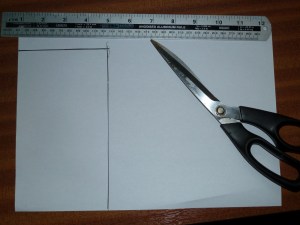 Make a two-battery sized template to mark out the hole to be cut. (This is the single battery one I used for the 60V upgrade)

The underseat enclosure already has a groove cut into it as a guide for cutting a hole for two batteries (for a 72V upgrade). I made one side of my hole run along this groove, as it made cutting easier. I’ve not used the whole length they suggested though, as I wanted my battery to be a very snug fit so it doesn’t rattle around.

The photo below is one I took for my 60V upgrade, so the template is just for one battery. Imagine a piece of paper twice the width.

Mark it with a ruler and pen, or just score lines along with the blade of your knife as a guide to where you need to cut. Then carefully cut through the plastic with a fresh, sharp blade. The plastic is tough, so be patient.

Once done, test it for fit and adjust the hole until it’s nice and snug, but not so snug that it’s a struggle to get the batteries through. At this point it’s a good idea to also make two 6mm notches at the corners of the hole by the new bank’s master terminals either side. This will give you somewhere to feed the cables from the main battery bank below. 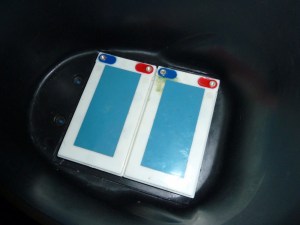 That done, you can put the seat back together and reattach it to the bike in preparation for the main work in Installing the 72V Controller.

This entry was posted on Wednesday, September 22nd, 2010 at 9:39 pm and is filed under 4.2.3. Cutting a Hole for the Extra Batteries. You can follow any responses to this entry through the RSS 2.0 feed. You can leave a response, or trackback from your own site.

2 Responses to Cutting a Hole for the extra Batteries