Not so good vibrations…

When you put together any assemblage of solid-state parts that are all tucked safely away in a vehicle’s compartment, it’s easy to get lulled into a false sense of a security, thinking of the various components and the wiring that connects them purely as static entities. It’s easy to forget that when you’re bouncing along down roads laden with pot-holes and crevices, all of these items start to vibrate, jiggle or even bounce around in a variety of exotic ways. Toughly clad wiring, and connections that look solid as a rock can start to erode in subtle and insidious ways that can potentially result in a catastrophic failure.

One of the advantages of constantly tinkering with with my bike is that I get the opportunity to look things over, check connections, and fix anything that seems to be amiss. I also become acutely aware of how, across the miles, the most solid looking assembly can degenerate with alarming speed. All the nuts and bolts that hold the bike together can slowly begin to work themselves loose under the barrage of vibrations that assail them while they’re in motion.

The routing of cabling is particularly important in this respect, as trapped, pinched or chafing wires will gradually succumb to friction, resulting potentially in shorts. I noticed this very quickly after I’d rigged up my makeshift cable serving the 12V system.In a hurry to get up and running I’d not given though to this and just squeezed it down the side of the hole with the batteries. Within a week it had started to show signs of wear where it had been rubbing against the too-tight space that had been allowed for it, nicking the insulation to the point that the copper was showing through. Cutting a slot for the said wires, and patching them up with a length of insulation tape fixed the problem, but a more subtle and serious instance of this was already in the making.

If you’ve been following the story of my upgrade you’ll recall how I installed and routed thicker welding cable around the upgraded battery bank. Below are pictures of the work in progress.

Zooming in on the master terminals of this picture, you’ll see how both the positive and negative cables have been routed along side by side, eventually leading to the back of the bike where they meet the Anderson connector. 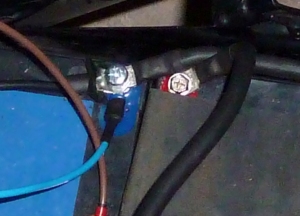 On the face of it this looks OK, as I was careful to put good, solid lengths of heatshrink by the connector to keep it safely insulated, and the thick insulation on the weld cable is more than adequate. But now think of this all in motion with the batteries jiggling up and down with every bump in the road, and the bolt on the positive terminal scraping against the cable from the negative terminal, rubbing against the thick rubber insulation and slowly wearing through it…

All easy to see with the benefit of hindsight, as, a few weeks later, I was greeted by this sight when I took things apart in the course of doing some work on the bike:

The bolt on the master terminal had been slowly chewing its way through the adjoining cable’s insulation, finally arcing against the bare wire of the negative cable.

Because the arcing was intermittent, I never noticed anything while riding the bike, which worked fine, but there was a real danger here that – had the vibration also loosened off the bolts on the master terminals – the bared wire could have wedged itself against the positive terminal, potentially destroying the batteries or even setting them on fire. Fortunately I saw this before the situation degenerated any further, and the problem was easily fixed with a fresh, double layer of heat shrink, and a new path that kept the two cables well clear of one another.

Don’t make the same mistake as I did here! Because of the layout of the battery bank, the master terminals are very close together. If you upgrade the leads on your battery bank to something thicker, take care to route the cables very carefully and well away from where they can make contact.

Regular inspection and maintenance is really important with electric bikes, as the sheer weight of the battery banks makes them particularly prone to shaking around with quite a bit of force.

This entry was posted on Saturday, October 9th, 2010 at 8:10 pm and is filed under 1. Main Blog. You can follow any responses to this entry through the RSS 2.0 feed. You can leave a response, or trackback from your own site.