N.B.: This upgrade is only suitable for bikes with “infineon” type controllers with an EB-206/212/218 board, such as the LYEN Edition Controller and  eCrazyman controllers. Check that your controller type supports speed control settings before going ahead with this upgrade! You will also need the USB/TTL programming lead and software that enables you to program the controller settings.

To fit the switch, you remove the throttle control by loosening the alan bolt that secures it, and sliding it off the handle. You then slide the switch onto handlebar so that it sits next to headlight switch mounting, and secure it by tightening its alan bolt. The throttle is then slid back into place to its right and similarly resecured.

The switch is connected by a good length of cable to a standard three-way mini connector.

To feed the cable through to the rear of the bike, I removed a side panel to route it through to where it was within reach of the controller, using cable ties to secure it.

At the controller side, the EB-type boards support three speed settings, which can be set via the Parameter Designer software that is used to program the controller. The speed settings can be found in the “Speed Mode” panel on the right of the settings screen. Three speeds – Speed 1, 2 and 3 – are listed which are all set to 120% default. Modifying these enables you to customise the amount of power that is delivered by the controller in response to throttle movement.

In effect, lower speed setting values decrease the throttle sensitivity, making it so that more rotation of the throttle is required to deliver a set amount of power. In addition to letting you set up an ‘economy mode’ which restricts the amount of power you use, it is also hand for creating a ‘low-gear’ for manoevering at low speed. This is particularly handy if you are running at very high current and voltage, which can make the throttle twitchy and oversensitive.

The key to rigging up a three-speed switch is understanding how the EB board sets its speed mode at a hardware level. The way it does this is fairly straightforward. There are two terminals on the PCB, X1 and X2, which are simply shorted to GND (battery bank negative) to set the controller’s speed mode. Shorting X1 to GND puts the controller into Speed 1 mode, shorting X2 to GND selects Speed 3 mode, while leaving both of these terminals un-shorted keeps it in the controller’s defaul Speed 2 mode. Effectively the bike is always running at the Speed 2 setting, unless it is told to do otherwise by wiring up a switch to short X1 or X2.

In terms of the physical layout of the connector attached to the switch, it looks like as below. The black wire goes to GND, while the green and red go to X1 and X2 respectively.

Adding a Connector to the Controller

The main part of the job that needs to be done is to add a connector to the controller. To do this, the case needs to be dismantled and the PCB carefully removed. The X1 and X2 terminals are clearly marked and simply need a couple of suitable, small guage wires to be soldered to them, These wires can then be fed through the end of the case by threading them through the hole with all the existing wiring. A two-way mini connector can then be added and the case re-sealed.

This is the final arrangement on my bike. A two-way connector feeds through to X1 and X2 on the controller board via grey and purple wires. If you wanted to use a GND (battery bank negative) connection from within the controller, rather than somewhere else on the bike, you could have an extra wire here and use a three-way connector instead. I chose to only run wires for X1 and X2 from the controller, and found a place elsewhere on the bike, to earth the GND wire directly from the switch itself.

The X1 and X2 connector for the speed control switch.

The only thing that remained for me to do was to assemble a short length of cable to join the three-pin male connector from the switch tothe two pin connector I had wired up to the controller. The remaining GND wire was routed to a connector on the loom that served the negative terminal of the main battery bank.

This done, it’s simply a case of programming your controller with suitable speed settings. For testing purposes you should make sure that the settings are far enough to be clearly noticeable when you switch modes. I set mine to 40%, 70% and 120% for Speed 1, 2 and 3 respectively. 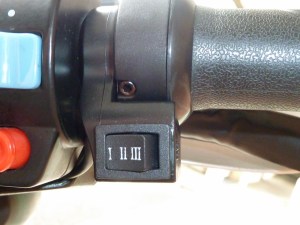 You can test it on its stand easily enough by holding the throttle open a set amount and switching between modes. If you’ve got it right, the motor will slow and speed up accordingly.

This entry was posted on Monday, August 15th, 2011 at 8:41 pm and is filed under 1. Main Blog, 4.5.6. Installing a Speed Control Switch, 4.8.2. Enabling Speed Control Settings. You can follow any responses to this entry through the RSS 2.0 feed. You can leave a response, or trackback from your own site.