It’s back! The Fechter-Goodrum 4.4 Zephyr board (now available here!)

It’s been nearly two years since Gary Goodrum and Richard Fechter made the controversial decision to put the welfare of their families before their obsession with exotic BMS designs, and suspended development of their now-famous BMS boards. Ever since they ceased trading, though, there’s been an unremitting stream of posts and queries asking after the boards and bemoaning the fact that they had pretty much ceased to exist.

Thanks to the wonders of cyberspace though, the designs were very much alive and well, and Richard Fechter seems more than happy to hand over the PCB cad file to anyone who was prepared to sink their own money into having some made. Challenge accepted! So after crowbarring open the proprietary ExpressPCB file format into a universal format that all PCB manufacturers use, I got a bearable quote and put through an order.

For those of you who haven’t heard about it, the Fechter-Goodrum v4.4 BMS is a cutting edge LiPo/LiFePO34 pack charging & balancing system that includes a built in, fully-featured, cell-level LVC/HVC system, with a throttle pass-through and various alarm connections. Naturally, the designers will get their cut of the profits once I’ve sold enough to break even. The margins are thin, but hopefully renewed interest in the units and a trickle of investment will keep the project moving forward or at least treading water until EV technology becomes more widespread.

So I’m the proud owner of a batch of the latest version of the Fechter-Goodrum Zephyr, version 4.4a. They’re almost identical to the one I used in the Zephyr unit I built, except the ones I ordered have a silkscreen print of the components to make it a little more user friendly (and pretty). 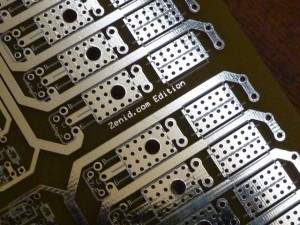 Of course, I had to add my own personal touch, and “Zenid.com Edition” discretely adorns the edges of each 8-channel section.

So there you have it, folks. If you need a solid and dependable BMS/LVC system, and love to make things yourself, you might consider building one from the ground up. All the relevant parts lists and documentation can be found in the shop and on the Zephyr thread of Endless Sphere.