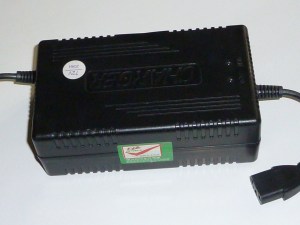 Electric scooters  usually come in 48V, 60V and 72V form (the 72V version usually by upgrade) and are powered by four, five or six 12V SLA (lead acid) batteries connected in series. Each type of bike therefore requires a different charger depending on the voltage of the bank that needs to be charged.

The chargers work by delivering an output voltage to the master terminals of the battery bank which is about 15% or so higher than the bank’s nominal (named) voltage, as this is the voltage that that the bank needs to reach in order to become fully charged. A 48V battery charger, for example, actually delivers about 56V or so, but by convention the chargers are named according to the battery bank that they are intended to charge and not by their output voltage.

The four battery series arrangement on the 48V Ego scooter

Do not get confused between the nominal (named) voltage of the charger and its output voltage, which is up to 12V higher than the bank it is intended to charge.

As a battery bank discharges, its voltage drops until it is a fair amount below its nominal voltage, whereafter it becomes effectively ‘flat’. However it is important that the batteries are not allowed to be discharged beyond a certain point. If they become too drained, their lifespan can be significantly impaired or the batteries can be irreparably damaged. For this reason, electric bikes – like other equipment powered by rechargeable cells – have a low-voltage cutout system that disconnects the power once the battery level falls below a certain voltage.

To preserve the lifespan of rechargable cells, particularly SLA banks, it is best to keep them topped up regularly, and not to discharge them too deeply too frequently. Keeping the batteries at a good level of charge will extend their lifespan and prevent the need for costly replacements of spent and worn out cells. 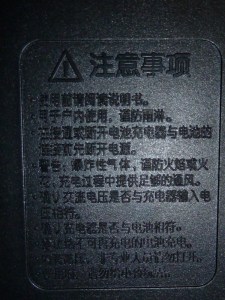