NOTE: This section was written before I found a supplier for a quality 72-12V converter. The unit has exactly the same 3-way mini-connector as the 48V converter that comes with the bike, and can therefore be mounted ‘plug and play’ in the same position as the old one. I would recommend this above building your own out of a PSU, as it’s built for this specific purpose, is more efficient and works out cheaper too.

Once batteries are added to the electrical system to raise the system to 72V, it is no longer possible to use the existing 48V factory converter which drives the 12V electrical sub-system. 72V converters are available to buy, but they are usually aimed at the marine market, and prohibitively expensive.

Mike of the Electric Motoring Forum has already documented this in his guide “Making the new DC converter”, but I’m also doing this as part of my ongoing upgrade activity. Much of this has therefore already been covered in his guide, but I have tried to improve upon the existing documentation by adding  more detailed explanations of the procedure along with a simplified explanation of the reasoning behind the rewiring schema. There are also quite a few more illustrations for clarity, and details of how to deal with the wiring in PSUs that don’t follow the circuit board layout for this particular model.

The modification to the unit is fairly straightforward. No extra parts need to be added. There is just a small amount of wiring and some soldering to do, and can be accomplished in a couple of hours or so by any reasonably capable DIY hobbyist with basic soldering skills.

The power-supply unit as it comes consists of a box which is powered from the mains via a lead (not shown) plugged into a butterfly socket on the front end of the unit. The circuit board converts this into a 12V DC/1.5 amp power supply to serve an LCD display or TV via a 3.5mm plug at the end of a lead leaving the back end of the unit. 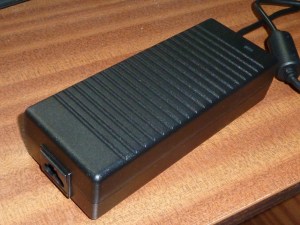 The circuitry, however, is capable of making a similar conversion on the 72V DC signal supported by the upgraded battery system.

The first thing to do is plug the power supply unit (PSU) into the mains to make sure that it actually works. Once it has been tampered with, obviously it cannot be returned for a refund or replacement.

Plug in the unit and use a multimeter to confirm that the unit is giving out around 12V DC. Hold one contact against the side of the 3.5mm jack, and insert the other into the hole in its end, like so: 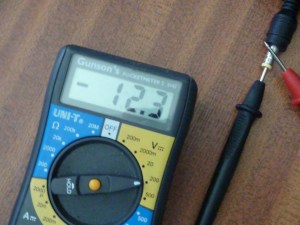 When you’re satisfied that the unit is functioning, then remove the mains lead and leave it for a few minutes to make sure that the capacitors have discharged.

3) Open the Case and remove the Circuit Block

On the back of the case, four screws are located underneath rubber grommets at the corners, that are used as the PSU’s ‘feet’. Peel off the grommets and undo the screws. 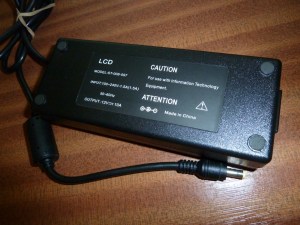 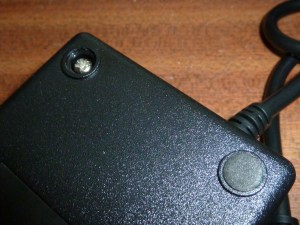 Remove the circuit block from its case by gently sliding it upwards to allow the socket to slide from its runners. It may be secured in place by a blob of glue on the base, in which case you may need to gently prise it free with a screwdriver. 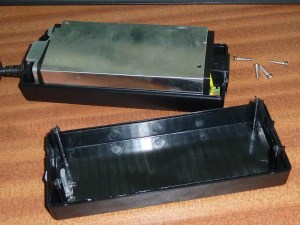 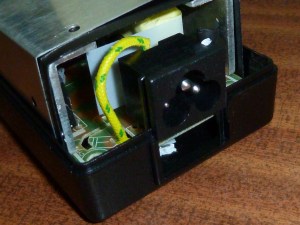 4) Remove the metal casing from around the Circuit Block

The circuit block inside is encased in a metal wrapper held in place by two small rivets. To release the metal casing, just make a small cut with the snippers and fold back the metal to free it from the studs.

Underneath the metal casing, is a plastic insulating layer. Remove that too and set it aside. 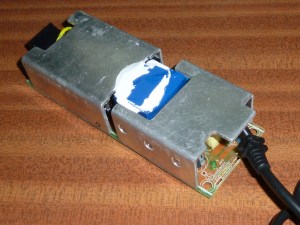 We are changing the layout so that both the input and the output of the unit are on the same end, and served by a single plug that is compatible with the motorbike’s electrics. The existing socket will therefore have to be removed so that we can wire our own in its place.

If your PSU circuit board is identical to this one, then the illustrations will be an accurate guide as to where you need to solder the three connections we have to make. However, if the unit is different, you will need to clearly identify where the connections from the socket meet with the PCB and make a note of them, substituting the locations on your own board for the ones here.

Either way, you won’t have to worry about the earth connection beyond removing the lead used by the existing socket. Only the live and neutral terminals on the circuit board are used in our new schema. 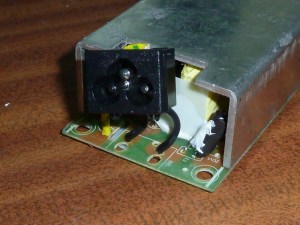 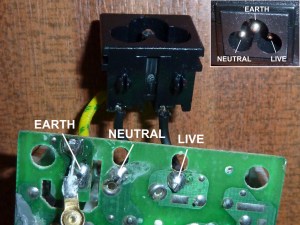 The first step is to de-solder the existing plug and remove it. 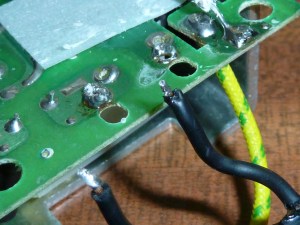 Next, we need to prepare the output lead. Cut the plug off the output wire to leave about 12 inches of the cord remaining. Then feed the lead back through the case to the other end, where the socket for the mains was originally located. Strip back the insulation to where it passes the end of the circuit board, revealing the 12V out, live wire (blue) and the neutral (bare copper strand) wire. (The insulation tape over the black wire is just there to cover a split I found on the wire). 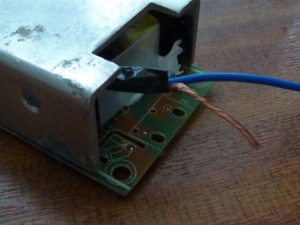 Thread this through the hole next to the one you just removed from the neutral solder-point. It shares the same terminal and will be cross-connected with our input neutral so that they are shared. 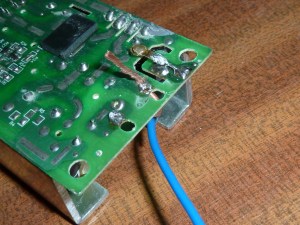 Solder it and clip off any extraneous length. 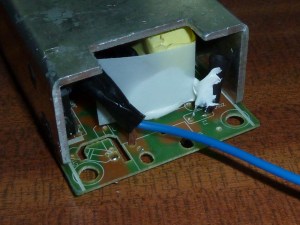 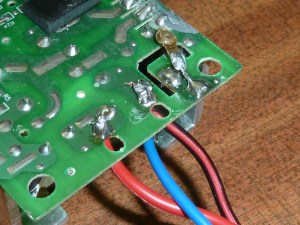 N.B: The blue wire (12V output) runs back through the circuit block to the other end where it originally emerged. The ‘black’ I used has a red stripe running down its underside that is visible from this angle. 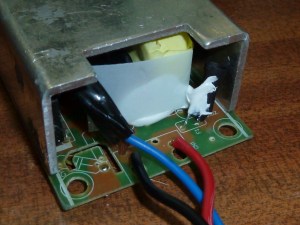 Next, you need to cut a small piece of plastic to fill the hole left by the original mains input socket. You can get this from some household item like the side of a shampoo carton or a plastic lid (I used a piece cut from a Lynx shower gel bottle).

A square 22mm x 19mm forms a near exact fit. If you make the fit a little tighter, it can be held in place by the case itself once it is screwed shut, without the need for glue. Check the size of your cut-out by closing the plastic case around it. 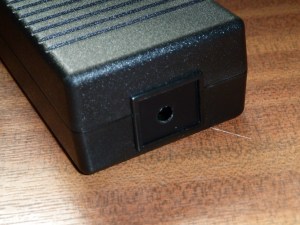 Next, drill a 6mm hole through your plastic to feed the wires through which are to be joined to the 3-way motorbike connector. 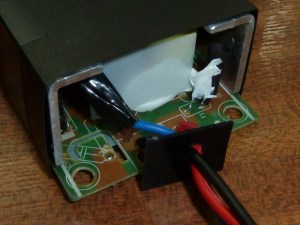 Crimp the wires into the pin connectors for the 3-way socket, then push them through the back of the female end of the socket. The Black goes to pin 1, the blue goes to pin 2, and the red goes to pin 3, as they are viewed from the back (where the wires go in) with the latch facing down.

Refit the plastic and metal shielding, re-engaging the metal sheet with the rivets and securing with a drop of solder if required. 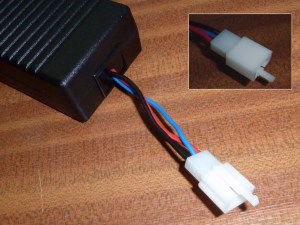 Finally slide the assembly back into its plastic case and screw it shut. If the plastic square does not stay firmly in place then a dab of glue, like epoxy resin can be put along the edges of the recess. 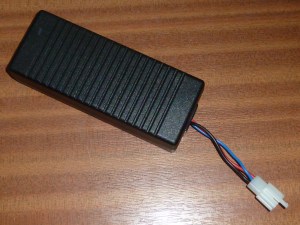 You should now have a fully functioning, plug-and-play converter that is compatible with 72V electrics!