At this point you should have upgraded your power cables with the nice thick welding cable or at least something better than what was there before. You will also have the four cables you were left with; two to string the batteries together, and the remaining ones that go from the master terminals to the Anderson connector that will serve power to the controller.

If you’ve just cut your hole and intend to go straight on to the main job of fitting the new controller, then don’t bother bolting the seat back on just yet. It’s best to leave it until the new arrangement has been tested ‘loose’, so that everything can be easily accessed if something needs fixing. It can all be put back together nicely when we know it all works as it should.

The first thing to do is remove the old controller. A single bolt at the front, and a clip to the rear should be securing it to its mount. Next disconnect the three phase-wires from the three-way (six terminal) junction box, unplug the hall sensor connector, brake connector and throttle connector, and then disconnect the main black/red feed wires from their terminals on the 2-way ceramic block.

The next thing your need to do is wire in the big cable you built with that Anderson connector at the end. This is the main power feed for the motor. The black connector goes from the master negative terminal (top left) to somewhere near the 2-way ceramic block (just by the breaker switch) where the old power terminals are located. 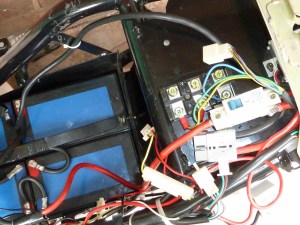 The red, positive lead goes straight from the output (ON/OFF) side of the breaker switch to the Anderson connector. This will power the new controller’s main motor-feed circuit.  The ceramic block will no longer be needed, as power to the controller will be taken from this new line instead.

The Anderson connector, with the positive about to be connected to the breaker switch

Why are We re-wiring this Bit?

If you look at the output of the breaker switch on the existing system, you’ll see one main, red power wire leave the breaker and enter the loom. This wire then loops back up the loom alongside a black ground wire, and re-emerges at the top to join with that ceramic block which currently powers the controller. 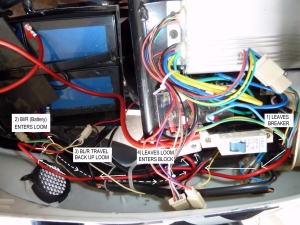 However it turns out that the length of wiring inside the loom breaks off to serve the ignition, so you can’t just dispense with this length altogether. The main power cable of our new arrangement, though, really doesn’t need to go all the way round to where it serves the ignition feed. It makes more sense to break our power feed away earlier, and take it directly from the breaker switch to the Anderson connector. It doesn’t affect the actual connectivity of the system doing it this way, provide we retain the length of wire up to the ignition feed and back to its earth-source.

So the first thing to remember, here, is that the red wire going from the breaker into the loom must remain, as must the black wire that goes from the master negative and up into the loom. These are both needed for the ignition circuit – DO NOT REMOVE THESE.

However you can remove the ceramic block, and cut off its two R/Bk wires where they emerge from the loom, as below. 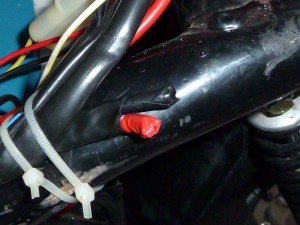 This all done, you should be ready to add the new batteries to complete the 72V bank, and wire in the new controller.

Assemble the new Battery Bank and test the 12V System

You can now wire the new 72V battery bank together. Be careful here, and think carefully about what you connect to what. If you have any doubts, use your multimeter to figure out where you are. Keep the breaker switch OFF until you’re ready to test the new configuration, but don’t be lulled into a false sense of security as you wire up that battery bank. 72V might not be lethal, but it can spray you with sparks and molten metal if you get things wrong.

When you’re ready, turn the breaker switch to the ON position and take multimeter readings to confirm that 72V is being delivered to the bike’s system.

If you built the DIY 72V-12V converter then now is the time to test it. Hook it up to the R/Y/Bk three-way mini-connector on the bike’s loom that used to host the old adaptor and switch on the ignition. The green light should glow dimly and the electrics should work as they did before. At this point you might also want to test the indicators; if the polarity on the DIY unit is wrong (-12V rather than +12V) then the blinker unit won’t work and the indicators will fail.

If you bought the 72V-12V converter (as I’d recommend for this upgrade), then you just replace the existing 48V converter with this instead. In fact, since the converter will run off of 20-72V, you can replace this as the first part of the upgrade, as it should still work with the scooter in its original 48V configuration. 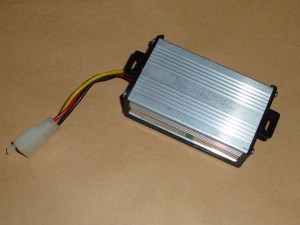 Wire in the Controller

All that remains now is to wire in the controller to its corresponding connectors on the loom. You might want to leave the controller ‘loose’ as you connect up the cables and figure out how to physically route them all round to where they need to be. Then you can bolt the controller in properly once everything is working.  Turn the breaker switch back to OFF until all your connectors are properly hooked up.

This is straightforward enough. In the last section you should have attached all the right connectors to the Controller, including the Anderson for the main motor power. This now just plugs into the Anderson connector on the loom: Just make sure you have the black/red wires the right way round.

2. The Phase Wires and Hall Connector

The three Bl/Gr/Y phase wires just hook up to the big three-way junction where the old ones went. Colours seem to be standardised as far as these connectors are concerned, but there are rumours that these sometimes need reversing to make things work. I have yet to see this problem, so start with checking the throttle connector if things don’t start up straight away, as this is often the culprit.

Once you’ve connected the phase wires, check the six-pin Hall sensor connector (Bl/Gr/Y/Bl/R) on the new controller and plug that into its counterpart on the loom. On both controllers I’ve had, there has never been an issue with this connector.

3. The Brake/’Ignition’ and Throttle Connectors

Next comes the two-way brake/power feed connector, and the R/Bk/Gr three-way throttle connector. Below you can see these connectors as they were hooked up to the old 48V controller:

BEFORE: The original brake/’ignition’power feed (left) and throttle cable (right) arrangement with the 48V controller

On the new controller, you simply connect up the two-way R/W connector you attached for the brake/power feed, along with the new R/Bk/Gr throttle connector.

For the two-way brake/’ignition’connector (below right), the green from the bike’s loom (which comes off of the brake-light circuit), goes to the white wire on the controller. The red wire on the loom (which comes from 72V circuit) goes to the thin red wire on the controller. If you have any doubts about the which wires from your bike go where, then measure them with a multimeter. The red 72V wire should measure 70-76V or so when the ignition switch is ‘on’. The green wire should measure around 12V when the brake is operated or the sidestand switch is activated.

For the three-way throttle connector, you need to MAKE SURE THE THROTTLE CONNECTOR WIRES MATCH UP! The colours either side should all match (though the ones on the loom may have a white stripe as below). The red, black and green wires on one side of the connector should meet the red, black and green wires on the other side. If they don’t match, then pick them and swap them round on the controller side.

AFTER: The new brake/’ignition’ power feed (right) and throttle cable (left) arrangement with the 72V controller

Once everything is connected up okay, you can turn on the breaker switch and see if it all works.

This is the moment you’ve been waiting for. But don’t panic too much if nothing happens right away, as you probably forgot something basic.

First check that the bike is firmly on its stand with the rear wheel raised clear of the ground. Turn the ignition key and gently turn the throttle. If the motor whirrs to life, then congratulations, you evidently did everything right. Squeeze the brake at the same time as the throttle to make sure the throttle cut-off works (the brake should cut off power to the motor).

If nothing happened then:

1) Do one more check of the voltage on the main power wires. Is power actually getting through to the controller? Is there any power at all? Are the batteries all wired up properly, with no breaks in the circuit?

2) Is the brake light on? If so, did you perhaps leave the side-stand slightly down so that the brake cut-off is in operation?

3) Are you sure that THROTTLE CONNECTOR is properly wired up? If you checked all of these things and are still having no joy, then you might have bought a dead controller and may need to return it. Did you buy a spare? If so, you can try that one too. If not, then you’re out of luck and will need to ‘revert’ to 48V mode until you can figure out what’s up.

If you just can’t figure out what the problem is, then you can post a message here or to the Electric Motoring Forum.