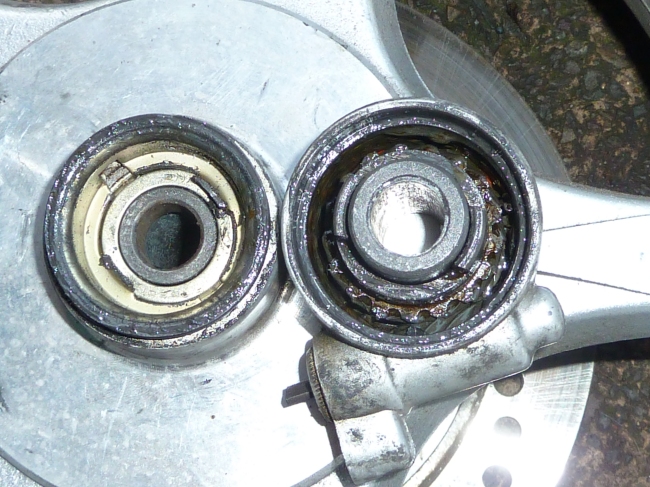 The front wheel with axle and speedo-driver assembly removed

My bike has just celebrated its 3 year birthday, and with it, it’s now required to have an annual MOT inspection (UK), therefore much of the last couple of weeks was spent fixing a few things that needed doing to make it roadworthy. There was a broken weld on the centre-stand and a nail stuck in the back tyre. Most importantly, the speedometer hadn’t worked for a good while now, ever since the speed had first gone ‘off the clock’. I’d been putting the job off because it meant dismantling the instrument display to check on possible causes there.

The speedo works via a little driver attached to the axle by the front wheel (above right, and below). As the wheel rotates, this turns little cogs in the driver, that turns an impeller, which hooks into the base of the speedo cable. At first, I’d come to the conclusion that since spinning the wheel made the little impeller (the slot poking out of the speedo-driver) rotate, then the fault must be with the cable or behind the instrument display. The cable checked out fine, and oddly, so did the instrument display, so I backtracked to the speedo-driver again. 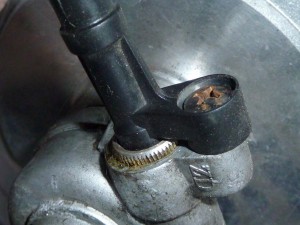 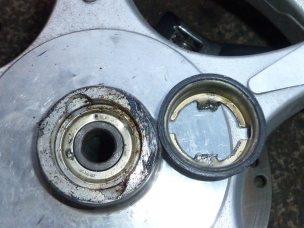 It turned out that though the impeller was indeed turning, any light resistance would make it slip. This slippage, it turned out, was due to a worn coupler. The piece – a bit like a bottle cap that fits in a recess at the centre of the wheel – anchors itself to points in the driver via a couple of little tabs at either side.

The tabs on mine were worn away and mashed-up looking, and no amount of bending them would make them engage. Eventually, though, a local bike shop found one identical that got me back in action for the MOT. 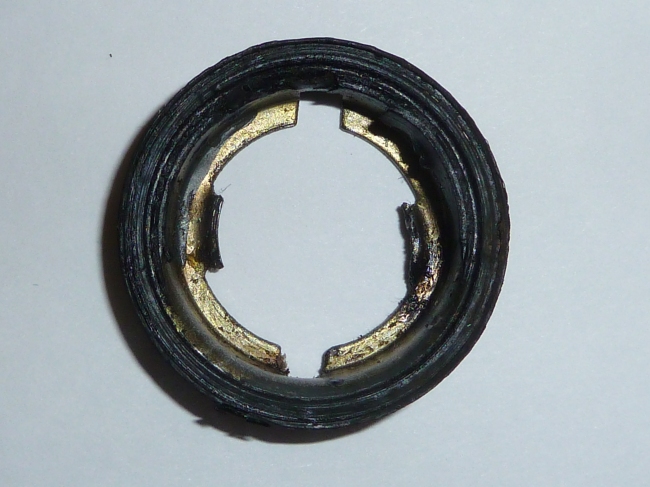 The coupler to secure the speedo-driver assembly

A week later though, and the day before the MOT, the speedo failed again. It turns out that the tabs on this new one had gotten mashed down, so I plied them back up again as a repair. I’m not sure why it failed so quickly – maybe the relatively high speed of the bike, and the fact that the cable could do with some grease, resulted in it sticking as it rotated. I’m going to cover the whole length of the speedo cable in grease next, to see if that fixes it. I might also extent the tabs further up by sawing or slitting extra length for the tabs from the base. They don’t seem to go up far enough to make a firm connection with the driver assembly so a bit more bodging might be in order.

The good news, though, is that the bike got through its test just fine. A few days previously I’d had my local bike shop fix the tyre (I took tools with me and took the back wheel off myself), and so all I had to do was hope the speedo would last the duration of the test, which it did.  Despite my concerns (and others’) about my custom-built, LED headlights with their imitation, “dip-effect” function, there was no mention of this. Neither was there any quibble about the ever-so-slightly-too-small licence plate, either. He just tightened the rear brakes up a bit and left it at that. 🙂