Fried:  A cell dies during a charge and takes out a cell-circuit on the Battery Management System

The thing about Lithium cells is that they have to be treated with a certain amount of care and respect. You should get plenty of notice if cells are deteriorating. Weak cells throw the pack out of balance, taking longer to charge, and losing their charge more easily, lowering the capacity of the battery pack and the mileage you can get between charges. A while back, I finally got the cell-level LVC circuit of my Fechter Goodrum BMS up and working with my throttle and a warning light on my dash. If any cell goes below a certain threshold, a red warning light comes on permanently as an urgent alert to check my pack or give it a good charge. Since I typically recharge my pack well before it shows signs of flagging, I had hardly gotten to see it in action.

But one day when I was about to nip off to the supermarket I noticed that it was on. Checking the pack, I found that a slightly weak cell-pair had suddenly become a very weak cell-pair. This was one of the casualties from running the pack without an LVC system for so long, – I’d had to replace some cell-pairs when I’d run the pack almost flat a couple of times by accident (albeit over a 3 year span), but there was still one pair that was a little on the weak side but still serviceable.

So when the little red light came on  I was not entirely surprised, – the damage it had taken a couple of years earlier had finally caught up and the cell-pair was on its way out. If I’d been sensible, I’d have just pulled the pack there and then and taken the bike off the road, but I’d become quite dependent on the bike so thought I would run it a bit longer while I ordered a replacement pair of LiFePO4 cells.

Unfortunately, though, this isn’t such a good idea, as if you’re charging a pack and a cell-pair dies for good, this can result in damage to the BMS. So when, a couple of charges later, I noticed the charger was taking longer than usual, I should have unplugged everything sharpish rather than just leaving it to terminate of its own accord, which – in this case – meant turning the BMS’s corresponding cell-circuit turn into a giant fuse, burning most of its components to a crisp until the charger cut off automatically when it all shorted out. Taking the pack apart, the cells were clearly in quite a bad way. 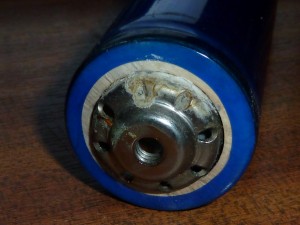 The cells themselves weren’t really the issue here, though. The real problem was the blowback onto my beloved, home-built BMS. The main FET had initially born the brunt of it, burning itself to a crisp and leaving the big resistors on the back looking a bit ashen.

The big resistors were still apparently alive, but given their condition (and the fact that they’re pretty cheap) I elected to replace them with other affected components. The capacitor here was also toast. 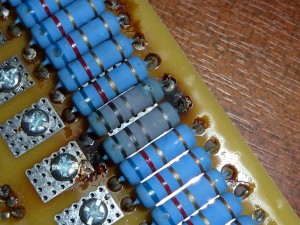 The poor little 48.7KΩ and 220Ω resistors are almost totally destroyed. I think that as soon as the FET had burnt out and shorted, the power that would ordinarily be burned off as heat through the big resistors was channeled to the little resistors, which were pretty much totally destroyed. That – in turn – would have triggered the charger to shut down either via a signal from the BMS control circuitry, or the charger’s own safety cut-off. Either way, the charger checks out okay, so all I had to do was fix the circuit. 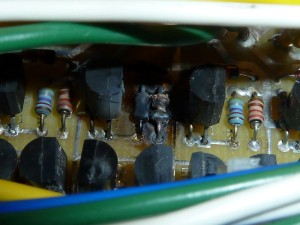 Resistance is futile: Two of the 1/8W resistors are totally incinerated

My basic game plan for fixing the circuit was simple enough: Replace anything clearly burnt to a crisp, test other components and replace any obviously defective ones, then run resistance tests across the circuit until I got a result very similar to that across other cell circuits. One of the good things about these boards (Fechter Goodrum v4) is you really don’t need to know much about how they work to fix them: you can compare resistance meter and continuity readings between various bits of a dead circuit, and then compare those readings to any of the neighbouring circuits that are working. If you don’t get the same resistance readout across your circuit after replacing something, then just keep replacing things until you do!

So once my Mouser order was in for some spare cell-circuit components,  I went ahead and started replacing components. First, I switched the main FET and the two resistors. Next I pried out the incinerated little resistors and cleaned up the surrounding area with wire cloth.  I also took out the dead capacitor. For reference, here’s a little map of the components further down: 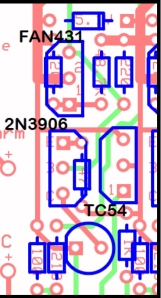 I took the FAN431 next to the frazzled resistors out too, as well as the diode, then replaced the top diode and resistors with fresh ones. 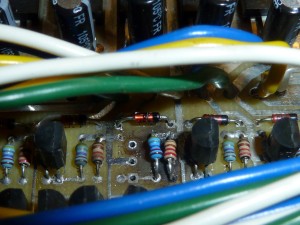 The 2906 transistor was shorted so I removed that and the 47Ω resistor next to it, which was also burned out. The TC54 transistor next to it came out too, since replacing all the the 2906 and all the other stuff still hadn’t restored the correct resistance readings for the circuit.

With the 2906 and the TC54 transistor replaced I just had one problem: The 47Ω resistor was on back order, and not due in for another couple of weeks. Fortunately this didn’t affect my ability to test the circuit, I just temporarily stuck a larger 1/4W resistor of the same value into the holes to check the circuit. I’m getting all the right readings, now and it looks all ready for a proper test.  I just have to wait for that one little set of 47Ω 1/8W  resistors to arrive in the mail. 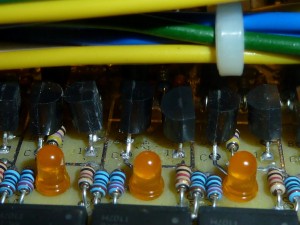 All done, except for that one resistor

For anyone interested in joining the exciting world of homemade battery management systems, check out my thread for the Fechter Goodrum “Zephyr” 4.4 boards, which I also sell in my shop.  I’ve had mine for nearly four years now, and this is the first time I’ve managed to do any damage to it.

The take home message from this is of the stitch-in-time-saves-nine variety: There’s little point in having a great, cell-level, LVC system and battery monitor that warns you of weakening cells if you don’t heed the warning signs and red lights and keep chancing it with further recharges. Change weak cells sooner rather than later, don’t tempt fate by ignoring the warning signs of a dying cell-pair, and don’t continue to charge them until they die right in the middle of a charge cycle.